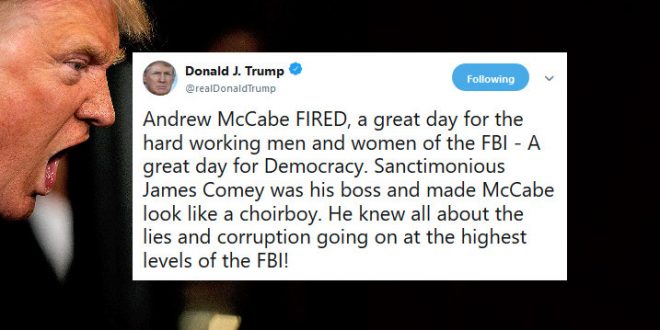 President Trump celebrated the firing of former FBI deputy director Andrew McCabe late Friday on Twitter, calling it a “great day for Democracy.” Attorney General Jeff Sessions fired McCabe, who was set to retire on Sunday, for not being forthcoming with investigators during an inspector general review. Trump had repeatedly attacked McCabe, claiming that the former FBI official was biased against him and going after his wife’s connection to prominent Democrats.

In a blistering statement Friday night, McCabe said his firing is part of a larger effort to discredit the FBI and the special counsel’s investigation. “This attack on my credibility is one part of a larger effort not just to slander me personally, but to taint the FBI, law enforcement, and intelligence professionals more generally,” McCabe said. “It is part of this Administration’s ongoing war on the FBI and the efforts of the Special Counsel investigation, which continue to this day. Their persistence in this campaign only highlights the importance of the Special Counsel’s work.”

Andrew McCabe FIRED, a great day for the hard working men and women of the FBI – A great day for Democracy. Sanctimonious James Comey was his boss and made McCabe look like a choirboy. He knew all about the lies and corruption going on at the highest levels of the FBI!

Gloat now, but you will be fired soon. And it’s not going to be done cowardly, as you’ve done to so many who’ve served you. There’s a storm gathering, Mr. President, and it’s going to wipe out you and your corrupt organization all the way down to the studs. https://t.co/I0UlNAlwxI