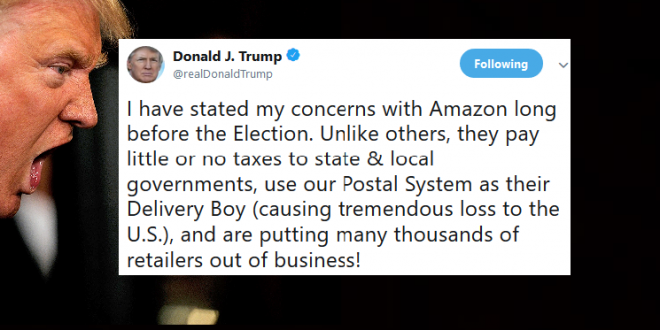 President Donald Trump criticized Amazon.com Inc. on Thursday, saying the e-commerce giant was “putting many thousands of retailers out of business.” Shares of Amazon.com slid on Wednesday amid speculation that the White House wanted to curb the company’s growing dominance.

In a briefing on Wednesday, White House press secretary Sarah Huckabee Sanders said that Mr. Trump wants “a level playing field “for all businesses but noted “there aren’t any specific policies on the table at this time.” An Amazon spokesman declined to comment Wednesday.

On Saturday Amazon (AMZN) will start collecting sales taxes on purchases in the last four states where it wasn’t doing so: Hawaii, Idaho, Maine and New Mexico. Four other states — Delaware, Montana, New Hampshire and Oregon — have no sales tax, while a fifth, Alaska, doesn’t have a statewide tax, but it does have municipal sales taxes.

The site has been rapidly adding the remaining states to the list of places where it collects taxes this year, bringing the total to 41 states plus Washington. And as of April 1, it will collect from all 45 states that have a statewide sales tax.

I have stated my concerns with Amazon long before the Election. Unlike others, they pay little or no taxes to state & local governments, use our Postal System as their Delivery Boy (causing tremendous loss to the U.S.), and are putting many thousands of retailers out of business!

Fact Check: Amazon has collected state & local taxes everywhere since March, 2017 (and in most states long before that.) They contract delivery through multiple services, including the USPS. You are ignorant of the facts and are spreading lies, as normal.https://t.co/ULBbejoKp8

“The whole post office thing, that's very much a perception he has,” a source told Axios. “It's been explained to him in multiple meetings that his perception is inaccurate and that the post office actually makes a ton of money from Amazon." https://t.co/dAXlhOuiuU pic.twitter.com/zzvQzhUDdQ

Previous Jared Fogle Names Trump In Plea For Release
Next Former AG Eric Holder: I Might Run For President