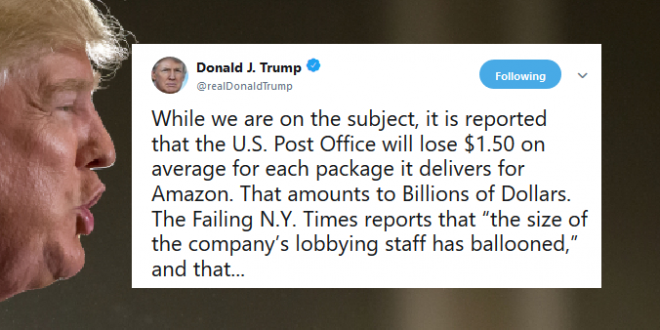 President Trump on Saturday claimed that The Washington Post is a “lobbyist” for Amazon. Trump made the claim during a pair of tweets railing against Amazon. The Post is owned by Amazon CEO Jeff Bezos. However, The Post and Amazon are two separate entities. This isn’t the first time that Trump has accused The Post of lobbying on behalf of Amazon — he called the newspaper a “lobbyist weapon” for the company in July.

Partly because of the large volume of packages it sends, Amazon gets discounted shipping rates from the post office. According to Josh Sandbulte, the co-president of a money-management firm that owns FedEx stock, this arrangement effectively subsidizes Amazon at a rate of $1.46 per box.

But Amazon says the relationship is mutually beneficial. In 2017, the company noted that the Postal Regulatory Commission “has consistently found that Amazon’s contracts with the USPS are profitable,” The Washington Post’s Brian Fung reported.

The Postal Service saw a net loss of $2.7 billion in fiscal 2017, driven by factors such as declining flat-mail volume and pension and health benefit liabilities. But its line of business for shipping and packages has been a bright spot in recent years, with revenue increasing by $2.1 billion, to $19.5 billion, in fiscal 2017.

While we are on the subject, it is reported that the U.S. Post Office will lose $1.50 on average for each package it delivers for Amazon. That amounts to Billions of Dollars. The Failing N.Y. Times reports that “the size of the company’s lobbying staff has ballooned,” and that…

…does not include the Fake Washington Post, which is used as a “lobbyist” and should so REGISTER. If the P.O. “increased its parcel rates, Amazon’s shipping costs would rise by $2.6 Billion.” This Post Office scam must stop. Amazon must pay real costs (and taxes) now!