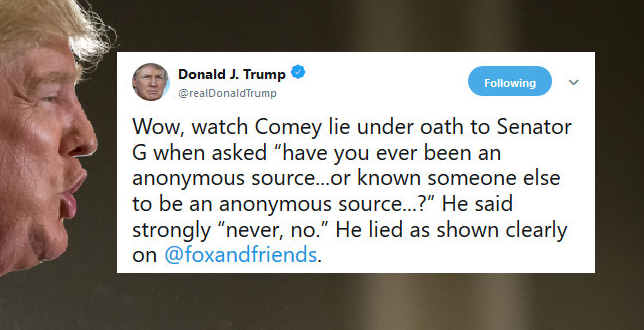 Donald Trump went on the offensive against fired FBI deputy director Andrew McCabe on Sunday, responding to reports McCabe kept memos of his conversations with Trump – and has turned them over to special counsel Robert Mueller – by claiming McCabe never took notes in meetings with the president.

The post came moments after Trump targeted Comey, the FBI director he fired last May, a move that led to the appointment of former FBI director Mueller to investigate Russian election interference and alleged collusion between Trump aides and Moscow. Comey has also said he wrote memos concerning interactions with Trump.

Trump was evidently watching his favourite Fox News show. Earlier, magazine show Fox & Friends played an exchange from a 3 May 2017 congressional hearing in which Comey was questioned by the Republican senator Chuck Grassley.

The president’s attacks, which Mr. McCabe on Friday characterized as a “war on the F.B.I.,” have gone too far for some Republicans. Senator Marco Rubio of Florida on Sunday criticized the decision to fire Mr. McCabe on a Friday night shortly before his retirement took effect, jeopardizing his pension.

“I don’t like the way it happened,” Mr. Rubio said on “Meet the Press” on NBC. “He should’ve been allowed to finish through the weekend.” Speaking of the president, he added: “Obviously he doesn’t like McCabe and he’s made that pretty clear now for over a year. We need to be very careful about taking these very important entities and smearing everybody in them with a broad stroke.”

The attack on Mr. Mueller, a longtime Republican who was appointed F.B.I. director under a Republican president, George W. Bush, followed a statement by Mr. Trump’s personal lawyer published Saturday calling on the Justice Department to end the special counsel investigation. Together, the comments raised the question once again about whether the president might be seeking to lay the ground to try to fire Mr. Mueller.

Spent very little time with Andrew McCabe, but he never took notes when he was with me. I don’t believe he made memos except to help his own agenda, probably at a later date. Same with lying James Comey. Can we call them Fake Memos?

Why does the Mueller team have 13 hardened Democrats, some big Crooked Hillary supporters, and Zero Republicans? Another Dem recently added…does anyone think this is fair? And yet, there is NO COLLUSION!