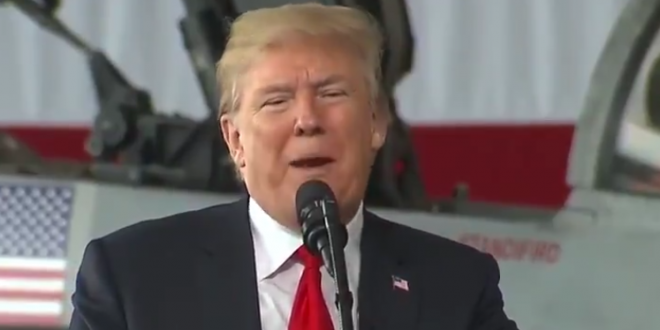 President Trump doesn’t think the U.S. military is large enough — so he announced during a bizarre press conference Tuesday that it will expand beyond planet Earth.

“My new national strategy for space recognizes that space is a war-fighting domain, just like the land, air and sea,” Trump told a crowd of Marines at the Miramar military base in California. “We have the air force. We will have a space force. We will call it the space force.”

It was not immediately clear what shape this so-called “space force” might take and what adversaries it would confront. A Pentagon spokesman did not immediately return a request for comment. Trump touted his proposed military addition as the next “big breaking story.”

“We’re doing a tremendous amount of work in space, and I said, maybe we need a new force. We’ll call it the ‘Space Force.'” pic.twitter.com/Ed3KiOKVSk

The battle for Mars between Elon Musk’s space mercenaries and Trump’s Space Force is going to be tremendous.

👽👽👽 OUT OF THIS WORLD 👽👽👽 Trump announces the U.S. will soon have a “space force” to wage war beyond planet Earth https://t.co/33dNBCAPuP pic.twitter.com/O8t85cD7tn

Trump floats the idea of creating a ‘Space Force’ to fight wars in space, https://t.co/SSUR3Sf59t

1/ Please don’t fall for the “Space Force” jokes. Trump making the militarization of space our national policy literally pits the US against the entire world.

Let’s go into some background. https://t.co/HWZiYzZ9VA

2/ In 1966, the US and Soviet Union signed a peace treaty for space, agreeing not to place nuclear weapons there. The reason is straightforward, because it poses a huge threat to human life.

This treaty led to decades of peaceful scientific collaboration in space.

3/ By 2006, the 1966 treaty had expired. The UN created a new peace treaty forbidding the militarization of space – again forbidding nuclear weapons.

The Bush administration opposed it, making the US the only nation on earth to vote no, though Israel abstained.

4/ With Trump deciding to break this treaty on the militarization of space, this means other nations could be forced to develop space-based weapons for nuclear deterrent.

This could start a new era of nuclear proliferation – literally the last thing we need right now.