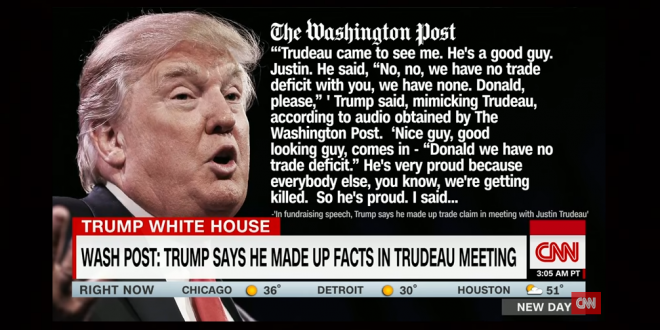 President Trump boasted in a fundraising speech Wednesday that he made up information in a meeting with the leader of a top U.S. ally, saying he insisted to Canadian Prime Minister Justin Trudeau that the United States runs a trade deficit with its neighbor to the north without knowing whether that was the case.

“Trudeau came to see me. He’s a good guy, Justin. He said, ‘No, no, we have no trade deficit with you, we have none. Donald, please,’ ” Trump said, mimicking Trudeau, according to audio of the private event in Missouri obtained by The Washington Post. “Nice guy, good-looking guy, comes in — ‘Donald, we have no trade deficit.’ He’s very proud because everybody else, you know, we’re getting killed.

We’ve had presidents who lied before. I’m pretty sure we never had a president who bragged publicly about lying before. https://t.co/zlwqf48S6U

President Trump lied. To an ally. Then he admitted to it. #fakepresident https://t.co/hfEBBh4x7I

President admits he doesn’t know what he’s talking about, goes on to prove it. This is amazing. https://t.co/FCC0bR4SZ1

Bragging about lying to an ally. How stupid. How Trump. Even worse he didnt know we have a surplus https://t.co/20hjOMoqho

President Trump admits he made up facts during a meeting with Canadian Prime Minister Justin Trudeau, and @NBCNews has obtained an audio recording of those remarks. pic.twitter.com/kmm62IYENz