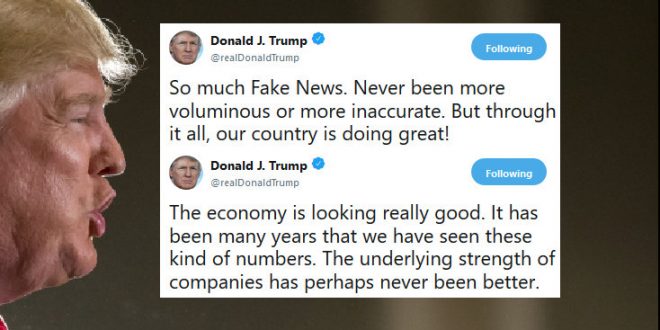 President Trump on Monday ripped “so much fake news” in a tweet following the highly anticipated “60 Minutes” interview with adult film star Stormy Daniels. Daniels claims she had an affair with Trump before he was president and was paid a sum of money before the 2016 election to keep quiet. A lawyer for Trump has denied the alleged affair.

Michael Avenatti, a lawyer for Daniels, on Monday questioned why Trump is not tweeting about his client. “Isn’t it interesting that we have a president that will tweet about the most mundane matters, but he won’t tweet about my client, the affair, the agreement or the $130,000 payment?” Avenatti told “CBS This Morning.”

So much Fake News. Never been more voluminous or more inaccurate. But through it all, our country is doing great!

The economy is looking really good. It has been many years that we have seen these kind of numbers. The underlying strength of companies has perhaps never been better.