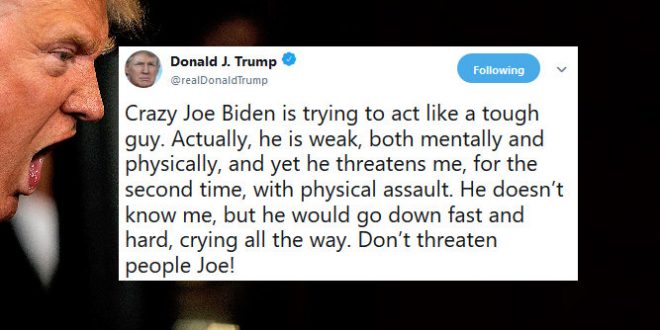 Trump: I Could Beat Up “Crazy Joe Biden”

“They asked me would I like to debate this gentleman, and I said no. I said, ‘If we were in high school, I’d take him behind the gym and beat the hell out of him,” Biden said in a speech at the University of Miami. Biden had made similar comments about Trump during the 2016 election when he was campaigning for Hillary Clinton.

Crazy Joe Biden is trying to act like a tough guy. Actually, he is weak, both mentally and physically, and yet he threatens me, for the second time, with physical assault. He doesn’t know me, but he would go down fast and hard, crying all the way. Don’t threaten people Joe!

Previous CHATTER AWAY: Overnight Open Thread
Next SFO Terminal To Be Renamed For Harvey Milk