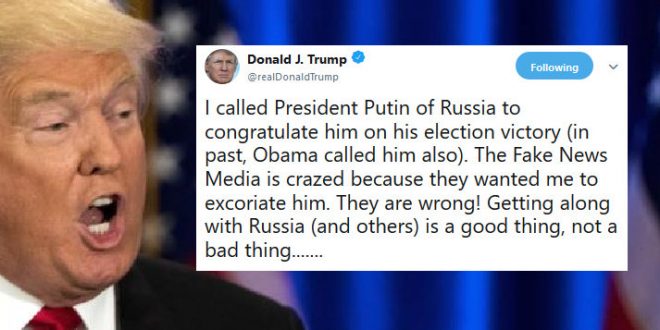 Trump Attacks His Predecessors In Defense Of Putin Call: We Need Russia’s Help In The “Coming Arms Race”

President Donald Trump on Wednesday criticized his three predecessors in defending his recent congratulatory call to President Vladimir Putin of Russia — a move that’s been widely criticized in the wake of news that Trump was specifically instructed not to congratulate Putin on his reelection.

Reports emerged on Tuesday night that briefing materials prepared for Trump’s call specifically said “DO NOT CONGRATULATE” and further recommended that the president condemn the recent poisoning of a former Russian spy in Britain, which the United States and several allies have blamed the Kremlin for.

I called President Putin of Russia to congratulate him on his election victory (in past, Obama called him also). The Fake News Media is crazed because they wanted me to excoriate him. They are wrong! Getting along with Russia (and others) is a good thing, not a bad thing…….

…..They can help solve problems with North Korea, Syria, Ukraine, ISIS, Iran and even the coming Arms Race. Bush tried to get along, but didn’t have the “smarts.” Obama and Clinton tried, but didn’t have the energy or chemistry (remember RESET). PEACE THROUGH STRENGTH!

Previous Mueller’s Already On Cambridge Analytica’s Trail
Next REVEALED: McCabe Oversaw Criminal Probe Of Jeff Sessions For Lying About His Contacts With Russians