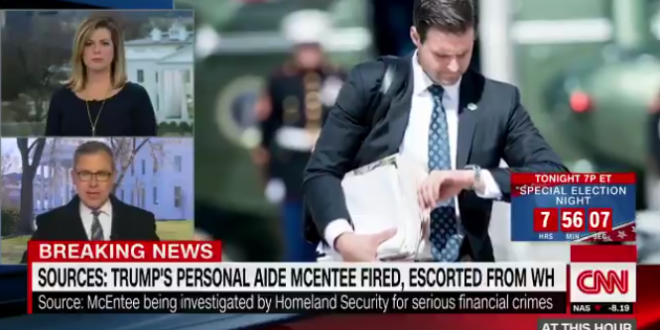 The bombshell firing of Secretary of State Rex Tillerson comes amid another shakeup in the West Wing involving President Donald Trump’s personal aide (his body man) John McEntee, who was escorted from the White House Monday, sources told ABC News. There were issues with his background clearance, according to the sources. McEntee is the latest original Trump campaign aide to depart the White House; he follows Communications Director Hope Hicks, who resigned recently.

McEntee — known within the West Wing simply as Johnny — is leaving the White House and taking a position on Trump’s re-election campaign, the campaign announced Tuesday. McEntee will be based in Washington. The campaign also announced that Katrina Pierson, who served as a spokesperson for Trump in 2016 and remains a frequent Trump surrogate on cable news, will join the campaign as a senior adviser.

New: Trump’s personal aide Johnny McEntee was fired because he is currently under investigation by the Department of Homeland Security for serious financial crimes, a source familiar with his firing tells @kaitlancollins

WH staff are shocked by this and have no idea why…. Trump’s longtime personal assistant, John McEntee, is fired for unspecified security issue https://t.co/yN1OB762TX via @WSJ

Fantastic profile of Trump’s body man, John McEntee, a trick shot QB who was one of the “originals” and has flown under the radar while staying close to POTUS. https://t.co/RPLaHP9txD by @nancook & @benjstrauss

Johnny McEntee, Trump’s personal assistant, was escorted out of the White House Monday, after being fired for an unspecified security issue, @michaelcbender scoops.

President Trump’s personal aide Johnny McEntee was fired because he is currently under investigation by the Department of Homeland Security for serious financial crimes, a source familiar with his firing tells CNN https://t.co/n09VdRlb8b pic.twitter.com/anoqny6OdM