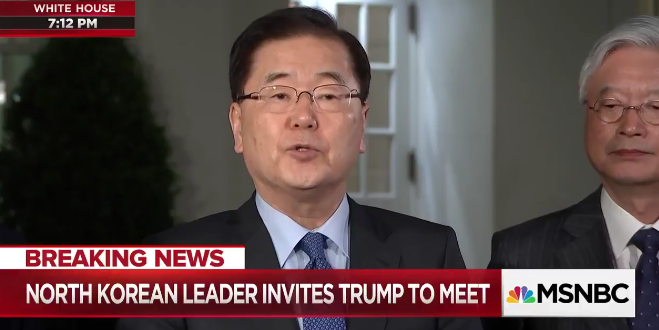 North Korea’s leader, Kim Jong-un, has invited President Trump to meet for negotiations over its nuclear program, an audacious diplomatic overture that would bring together two strong-willed, idiosyncratic leaders who have traded threats of war.

The South Korean official, Chung Eui-yong, who conveyed the invitation told reporters that Mr. Trump had accepted it and would meet with Mr. Kim by May.

For Mr. Trump, a meeting with Mr. Kim, a leader he has derided as “Little Rocket Man,” is a breathtaking gamble. No sitting American president has ever met a North Korean leader, and Mr. Trump himself had ruled out direct talks unless North Korea takes measurable steps toward relinquishing its nuclear arsenal.

Kim Jong Un: Fucking Hollywood.
Trump: Tell me about it!
Kim: Did you see that stupid Seth Rogen movie?
Trump: Don’t get me started on Alec Baldwin.
Kim: Can you drone those South Park guys?
Trump: I’d love to.

Presumably, North Korea’s plan is to replace Trump with a robot during his one-on-one meeting with Kim Jong-Un. They were initially worried their model wasn’t advanced enough to fool people, but now they realize they were overthinking it.

Previous First Review Of Kim Davis’s Book Reveals That God Speaks To Her Out Loud Because Of Course He Does
Next CHATTER AWAY: Overnight Open Thread