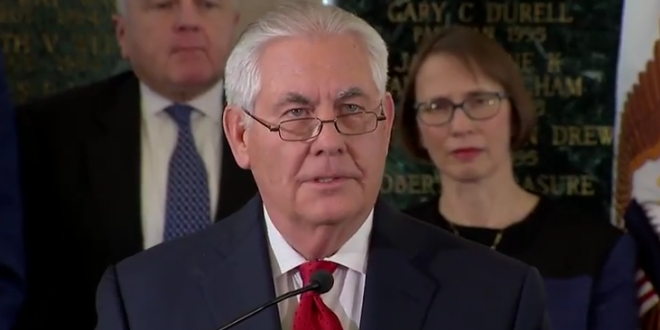 Rex Tillerson is officially done as secretary of state, but he got in what appeared to be one final dig at President Trump before heading out the door. At the every end of his farewell speech to the State Department on Thursday, Tillerson talked about the importance of maintaining your integrity and having respect for others. Then he turned to politics.

“This can be a very mean-spirited town,” he said, drawing knowing laughs and a round of applause, “but you don’t have to choose to participate in that. Each of us get to choose the person we want to be, and the way we want to be treated, and the way we will treat others.” It’s virtually impossible not to connect these comments to Tillerson’s ouster.

He was fired via tweet, and the No. 4 official at the State Department said Tillerson wasn’t given any advance notice. Then, in a closed-door meeting last week, White House Chief of Staff John F. Kelly reportedly told staffers that Tillerson received the news of his impending exit while on the toilet. Kelly has drawn plenty of criticism for disclosing that, even privately.