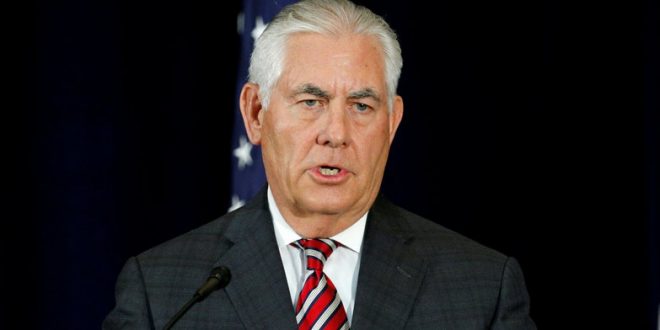 Tillerson Found Out He Was Fired From Trump’s Tweet

The State Department said that Rex Tillerson did not speak to President Trump before the announcement that Mike Pompeo would replace Tillerson as Secretary of State, adding that Tillerson was “unaware of the reason” for his dismissal. State added that Tillerson “had every intention of staying because of the critical progress made in national security.”

The media has been speculating that I fired Rex Tillerson or that he would be leaving soon – FAKE NEWS! He’s not leaving and while we disagree on certain subjects, (I call the final shots) we work well together and America is highly respected again!https://t.co/FrqiPLFJ1E

This is how the Secretary of State found out he was fired.

I am told Tillerson found out he was fired from Trump’s tweet.
This morning. Knew there was tension but was not going to quit and did not know he was fired

WH saying Tillerson was informed Friday, but State Dept statement today seems to indicate he just found out today. Which *really* makes one wonder about the role of the Russia statement yesterday.

WOW! The State Department now confirms to @CNN's @eliselabottcnn that Secretary of State Rex Tillerson found out he was fired from President Trump's tweet.

Rex Tillerson found out he was fired by President Trump's tweet on Tuesday morning, according to Steve Goldstein, undersecretary for public diplomacy https://t.co/rBLrYGBtnL pic.twitter.com/EtSU6CiR0z

— The Secretary of State, Rex Tillerson, called Trump a "F*cking Moron" and kept his job.

— Moral of the Story: Vladimir Putin is calling the shots, not Trump!#Rexit

Rex Tillerson, recipient of the Russian Order of Friendship, canned by Trump for being too tough on Russia.