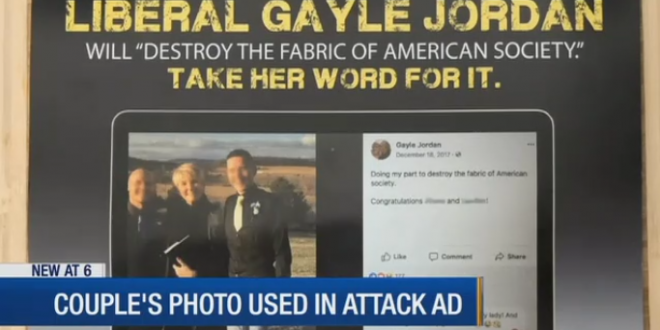 What would you think if you saw your wedding picture being used in a political attack ad? That’s the spot a local gay couple is finding themselves. Their wedding was officiated by a candidate for state senate, but the couple says they didn’t sign up to be caught in the mudslinging.

The Air Force veteran, who suffers from PTSD, said he and his husband are private citizens, and this is casting a shadow on a very important memory. “After being together for nine years, we have a bond,” said Shane Morgan, referring to his husband Landon.

Morgan said that’s why he was shocked to see a political attack ad mailer featuring a wedding picture of the couple with Gayle Jordan, who’s running for State Senate District 14. Jordan officiated the wedding. The mailer features the picture.

Above it, it says, “Liberal Gayle Jordan will ‘destroy the fabric of American society.’ Take her word for it.”

Morgan says the photo was lifted from his Facebook page. He and his husband are suing the Tennessee Republican Party for invading their privacy.