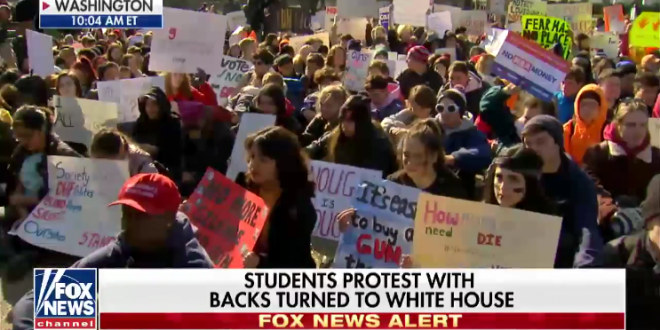 Over 3,100 walkout events are registered, according to event organizers. The walkouts are across the nation, from Maine to Maryland, from North Dakota to North Carolina, from the White House to Washington state, and even in Hawaii and the U.S. Virgin Islands.

Groups from around the world have also signed up, including in Australia, Israel, Switzerland, Germany and Mexico. The event began at 10 a.m. across every time zone and last 17 minutes — one minute for each of the victims gunned down in the Feb. 14 massacre at Marjory Stoneman Douglas High School in Parkland, Florida.

I walk in spirt today with my mom, a high school teacher, my brother Tommy, a senior in college, my brother John, a junior in high school, and my little sister Eileen, a 7th grader. They deserve to feel safe everyday. #neveragain #EnoughWalkout

Elementary school walkout in Alexandria, Virginia. More than 65 kids, and they are totally silent. Look at those faces. pic.twitter.com/ThyzDtyGo5

Students from Montgomery Blair High School in Silver Spring have begun their national walkout against gun violence and are marching to the White House with police escorts. 👏🏼✊🏼 pic.twitter.com/UCnDL41dpX

RIGHT NOW: Hundreds of students protest gun violence in front of the White House, as part of nationwide walkout. pic.twitter.com/vhKGxcjiq8

In support of the national student walkout over gun violence, Viacom cable networks, including MTV, Nickelodeon, BET and Comedy Central will all be suspending programming for #17minutes to honor the victims of the shooting at MSD High School in Parkland, Fla.#NationalWalkoutDay pic.twitter.com/0rdbwOoowN

Students and educators will walk out of classes this morning for 17 minutes at 10am, one month after the mass shooting at Marjory Stoneman Douglas High School in Parkland, FL. The walkout will last 17 min, 1 minute for each life taken.#WalkoutWednesday #NationalWalkoutDay pic.twitter.com/9yuvebFu9r

WATCH LIVE: Students at more than 3,000 schools across the country are expected to walk out of class this morning to protest gun violence https://t.co/B9gqfHUvRF #NationalWalkoutDay pic.twitter.com/uMvXtn6Pc5

WATCH: Students at Marjory Stoneman Douglas High stage a walk out to demand gun reform on the one-month anniversary of the shooting #NationalWalkoutDay pic.twitter.com/BheNa0mTVQ

Sizable crowd outside the White House this morning for the student walkout — chants of “hey hey ho ho the NRA has got to go” and “no more silence, end the violence” pic.twitter.com/McHZ054D39

Parkland student on the nationwide school walkout: “It shows the impact that we’re making and it really shows us that we’re not alone. It gives us a lot of strength.”