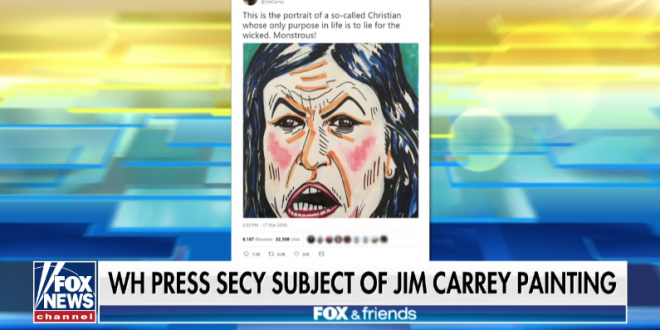 Fox & Friends were reliably horrified by actor Jim Carrey‘s harsh portrait of White House Press Secretary Sarah Huckabee Sanders, and they wanted everyone to know it – especially those hypocritical liberals.

“There is absolutely no tolerance [from liberals for conservatism],” Turning Point USA’s Candace Owens told Fox & Friends‘ Ainsley Earhardt. “They’re completely hypocritical in every single regard. We see this time and time again.”

“It is not Christian-like whatsoever,” she continued. “They celebrate women, only if women think exactly like they do,” Owens said. “That is, again, always what we see on the left. You have to subscribe to exactly what they think or else you will get attacked.”

This is the portrait of a so-called Christian whose only purpose in life is to lie for the wicked. Monstrous! pic.twitter.com/MeYLTy1pqb

Previous Kate Kendell Steps Down After 22 Years Heading NCLR
Next Christian Site: How To Stop Illuminati Witches From Controlling Your Mind With Sound Waves This Easter