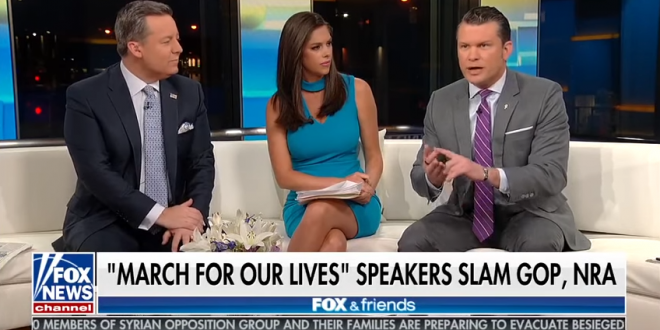 State TV Host: I Don’t Need Kids Lecturing Me On Gun Laws So This Morning I Donated To The NRA [VIDEO]

“I feel for these kids from Parkland high school. They’ve obviously been affected. They have a right to speak out and they should. But forgive me if I don’t want a lesson on the Second Amendment on a 16-year-old. Forgive me if I don’t want to watch a 9-year-old tell me that her dream is a world without guns. My world––I want a world without Islamists! I wish that was true too. It’s just not the case.

“The reality is the Second Amendment’s not about hunting, it’s not about self-defense only, it’s about free people and checks on a tyrannical government. They shouldn’t be giving me lessons on the Second Amendment, they should be in civics class. I watched that and you know what my reaction was? Honestly? I donated to the NRA this morning.” – State TV host Pete Hegseth, in his latest audition for a White House gig. Reportedly, he might get it.