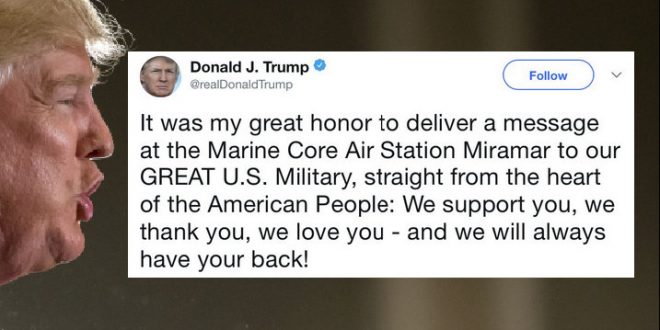 On the same day President Donald Trump proposed that the United States develop a “Space Force” to fight wars in space, he also paid tribute to the men and women in uniform here on Earth. Except his since-deleted tweet on Tuesday didn’t refer to the Marine Corps, but the Marine “Core,” a mistake many said the commander-in-chief should never make. Veterans, in particular, took offense.

“Marine Core.” Really, @POTUS? Maybe General Kelly can get a copy of the Grammar for Marines MCI for you. pic.twitter.com/VjEYvVD6w1

I served for more than 20 years in the Marine Corps. I know that he doesn’t read, but the fact that our Commander-in-Chief doesn’t know the difference between a Corps and a “Core” is more than a spelling error. Wrap yourself in the flag all you like – actual veterans have had it. pic.twitter.com/1N2cO36bgT

#WednesdayWisdom
The fact that Trump doesn’t even know that it’s the MARINE CORPS and not the MARINE CORE show exactly why he shouldn’t be the Commander in Chief. pic.twitter.com/vKcVgMgekp

If a Democratic president wrote “Marine Core” it would literally be the central Republican campaign theme. Conservatives would be talking about it 40 years later, like Jimmy Carter “inordinate fear of communism” stories. https://t.co/10mQ6pL9f3

People are mocking Trump for misspelling “Marine Corps” as “Marine Core,” but to be fair, since he dodged the draft to avoid serving, he’d never have learned how to spell it. https://t.co/8riMAZBXkz

If it truly was your honor you would know it’s Marine CORPS, not CORE. And throwing a military parade costing millions of dollars for yourself on a day for veterans when that money could be used for homeless veterans and vet mental health is dishonorable. #MARINESagainstTrump pic.twitter.com/ytdCrl4vkK