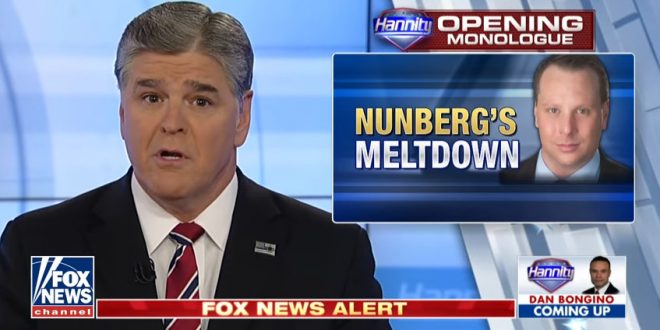 Posted this afternoon to Hannity.com:

Speaking during his opening monologue on ‘Hannity’ Tuesday night, Sean unloaded on the mainstream media’s “despicable” exploitation of a former Trump associate to damage the President; saying the liberal media has completely “stopped caring about the truth.”

“We have a brand-new example of just how despicably low the hate-Trump media will go at every cost to try and damage this President. The corrupt and abusively biased press is exploiting former Trump advisor Sam Nunberg to help do their dirty work,” said Hannity.

“Never mind the fact that this guy is in the middle of what is obviously a complete and total breakdown… The media didn’t care about any of that. They cheered him on because he was attacking the Trump administration,” he added.

Former Trump campaign aide Sam Nunberg on Wednesday insisted that his Monday media spree was not a drunken meltdown as some have speculated. “I don’t feel exploited,” Nunberg revealed. “I was playing everywhere… I was trending No. 1 on Twitter from a couch in my office.”

Nunberg said that he had come up with a plan for how best to reverse the damage he caused himself on Monday. He said that he had reached out to friends and reporters to insist that there was a strategy behind the television spectacle, and that it not been caused by alcohol. Although he did not say whether or not he had been drinking when he went on the air.

Previous Trump Advisor Carl Icahn Denies Insider Trading: We Had No Prior Knowledge Of Trump’s Tariff On Steel
Next OHIO: Man Arrested For Aggravated Menacing After Grindr Post Vowing To Kill “85 Faggots At A Gay Club”