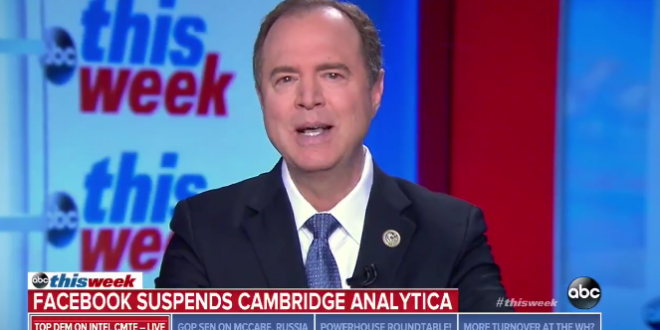 US congressional investigators want the head of data firm Cambridge Analytica to testify again before their committee, under subpoena if necessary, after a whistleblower claimed the company exploited Facebook and received millions of people’s profiles that were taken without authorisation.

Adam Schiff, the top Democrat on the House intelligence committee, called for the company to be “thoroughly investigated” and said Facebook must answer questions about how it came to provide private user information to an academic with links to Russia.

Schiff said: “Reports that an American professor with links to Russia was at the centre of this illicit transfer of information raises further questions, which the committee must investigate. Despite our request, and as set out in our status report, the committee has not had the opportunity to talk with numerous Cambridge Analytica personnel who may have knowledge of this and other issues – they must now be brought in for interviews.”

Schiff told ABC’s “This Week” that the ties the firm has to Russian groups and Wikileaks founder Julian Assange need to be investigated, and complained that Republicans on the House Intelligence Committee are preventing his panel from doing so.

Schiff said an investigation should focus on “that misappropriate information used by this digital arm of the Trump campaign to manipulate American voters, and of course the links between Cambridge Analytica and Julian Assange.”

Schiff charged that the CEO of the firm has reached out to Assange in the past and that there are links between the firm and a Russian oil company that wanted information about reaching American voters.

On questions swirling over Cambridge Analytica, @RepAdamSchiff says: “We need to find out what we can about the misappropriation of the private information of tens of millions of Americans… used by this digital arm of the Trump campaign to manipulate American voters.” #ThisWeek pic.twitter.com/Xx00ABc8pf