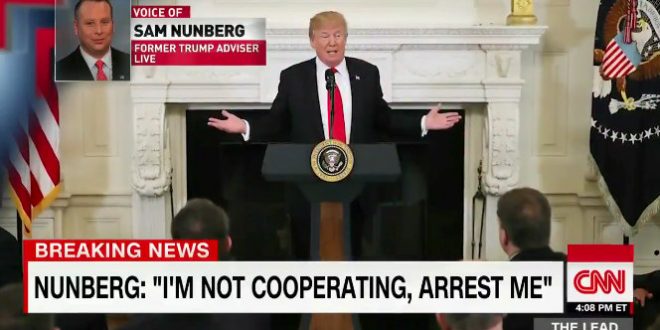 And the former Trump campaign adviser kicked off his wide-ranging interview with the CNN host by claiming that former campaign manager Corey Lewandowski had an affair with just-resigned White House comms director Hope Hicks.

Defending his decision to defy Mueller’s subpoena, Nunberg explained that he has not been in communication with Lewandowski nor Hicks, and did not want to hand his communications with former campaign staffers to Mueller.

“I despise Corey, why would I communicate with him?” Nunberg asked Tapper. “And Hope Hicks, who was having an affair with Corey?!”

Sam Nunberg is stating live on CNN that Mueller wants him to testify to the grand jury that Roger Stone colluded. I’m sorry but this is fucking incredible

What the fuck am I watching on CNN right now with this Sam Nunberg interview?!?!?

Former Trump aide Sam Nunberg on CNN now: “Trump very well may have done something with the Russians.”

Sam Nunberg is on CNN right now sounding like he wants to go to prison as soon as possible and I’m all for it.

Former Trump aide Sam Nunberg on the special counsel’s investigation: “They know something on [Donald Trump] … I don’t know what it is, and perhaps I’m wrong, but he did something.” https://t.co/aNSV4yxfEY pic.twitter.com/NgGvSfYAIk

Note the time Nunberg claims it took to gather the subpoenaed documents in each interview.

A liar will enhance his story the more times he tells it. Nunberg is the key to bringin’ down Roger Stone and, with him, the entire presidency.

Sam Nunberg just told CNN that he thinks Carter Page colluded with the Russians, then said “he was just a name on a list.”

Sam Nunberg for some reason still talking on @cnn: “I’m not a Donald Trump fan… he treated me like crap.”

Is anyone watching this all playing out and thinking “They are *definitely* not hiding anything. No, sir. All seems on the level.”

“i’m not going to produce every email I had” for investigators Sam Nunberg says. This is very loosely what people were chanting “Lock her up!” at Trump rallies over, right?

Carter Page: “Nobody is better at going on national TV and incriminating themselves than I am.”