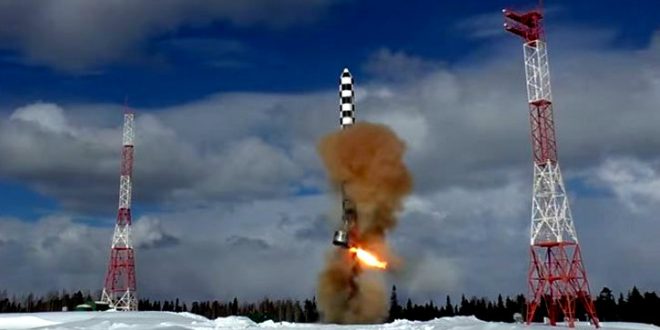 The Russian Defence Ministry has published a video showing its new intercontinental ballistic missile (ICBM) being test-launched in the north of the country. The footage shows the Sarmat missile – dubbed ‘Satan 2’ by NATO – being launched from the Plesetsk spaceport. The missile was one of several advanced Russian weapons President Vladimir Putin promoted in his state-of-the-nation address in early March. The RS-28 Sarmat is said to be capable of carrying up to 10 or 15 nuclear warheads and flying at supersonic speed.

The test-launch also comes after Putin’s recent re-election and a congratulatory phone call from President Trump — in which Trump reportedly also warned his Russian counterpart, “if you want to have an arms race we can do that, but I’ll win,” according to two officials that spoke to NBC News. Days before the launch, the U.S. Navy test-fired its own ICMB from a ballistic missile submarine off the coast of Southern California.

“No one has listened to us. You listen to us now,” Putin boasted during the March speech, when he revealed other weapons his country apparently has in the works, such as an underwater drone armed with a nuclear warhead powerful enough to sweep away coastal facilities and aircraft carriers, and a nuclear-powered cruise missile that’s “invulnerable to any existing or prospective air and missile defense systems.”

Putin claimed that the new weapons could best even the most advanced defense systems. He bragged that the RS-28 Sarmat could be launched from both the North and South Poles, making U.S. missile defense useless. While the latest version of its predecessor could strike targets over 6,800 miles away, Putin claimed the RS-28 Sarmat has “practically no range restrictions.”

“Sarmat is a formidable missile and, owing to its characteristics, is untroubled by even the most advanced missile defense systems,” Putin said during his speech, accompanied by a simulation of warheads being launched on Florida. “But we did not stop at that. We started to develop new types of strategic arms that do not use ballistic trajectories at all when moving toward a target and, therefore, missile defense systems are useless against them, absolutely pointless,” he added.