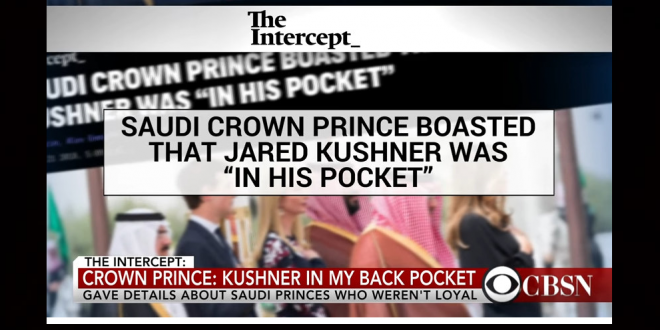 REPORT: Saudi Prince Privately Bragged To Multiple Parties About Having Kushner “In His Pocket” [VIDEO]

Alex Emmons of The Intercept reported Wednesday that Saudi Crown Prince Mohammed bin Salman has reportedly bragged to multiple parties that Jared Kushner, President Trump’s son-in-law, was “in his pocket,” citing a source who speaks often with confidants of the Saudi and Emirati rulers. Emmons joined CBSN to discuss The Intercept’s report Thursday morning, describing Kushner and the crown prince as having a “very special and close relationship.”

The Intercept reported that after Kushner made an unannounced trip to Riyadh in October, the prince, known as MBS, began his crackdown, and further, that during Kushner’s visit, President Trump’s son-in-law not only supported the crackdown, but also discussed specific names with the crown prince. These figures, Emmons said, “were disloyal” to MBS and were “agitating against his succession.”

According to The Intercept, Kushner had been briefed on this information in the Presidential Daily Brief before his security was downgraded, and the crown prince has been telling his confidants that Kushner passed on this information. It is unclear, however, exactly what information may have been shared between Kushner and the crown prince, according to Emmons, but the two conversed on the secure messaging app WhatsApp.