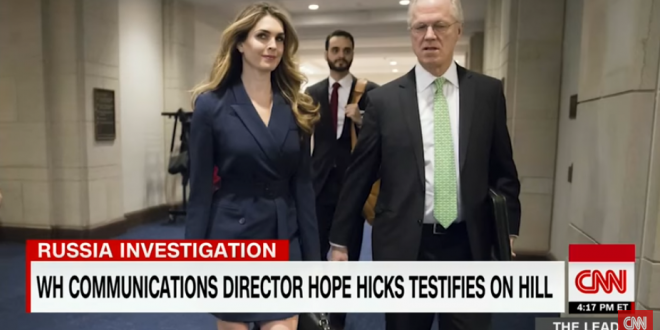 REPORT: Hope Hicks Resigned After Trump Berated Her For Stupidly Admitting She Had Lied For Him

Before her sudden resignation announcement, soon-to-be-former White House communications director Hope Hicks was berated by President Trump for admitting to Congress she told “white lies” for him, it was reported on Wednesday night.

The president got angry at Hicks after learning she made the revelation Tuesday to the House Intelligence Committee, which is investigating Russia’s meddling into the 2016 election, a Trump ally told CNN. A livid Trump demanded to know “how she could be that stupid” to admit she lies for the president, the report said.

Previous Falwell Jr. Blasts “Establishment Coward” Jeff Sessions: He Only Supported Trump To Hide Who He Really Is
Next Dolly Parton Donates Her 100 Millionth Kids Book