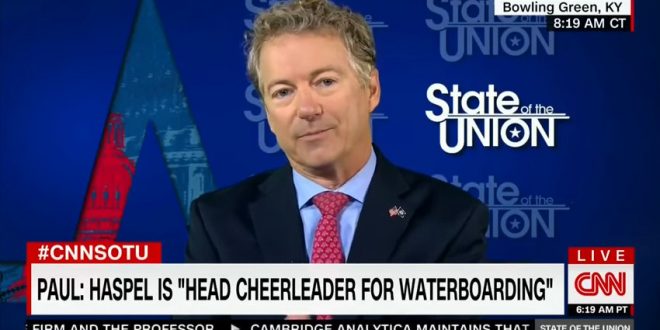 Sen. Rand Paul Vows To Filibuster Confirmation Of CIA Nominee: Torture Is The Hallmark Of Totalitarianism

Over the past several days, there has been an increasingly granular debate about the degree of Gina Haspel’s participation in the torturing of detainees at the CIA’s Thailand “black site,” with neocons going out of their way to try to defend the president’s choice to run the agency in the wake of Mike Pompeo’s departure for Foggy Bottom.

Some details may be disputed, but it remains true that Haspel ran a secret center in Thailand where prisoners were tortured. There is no question that during her career, Haspel participated in and helped develop the program that our own government has labeled torture.

Though there have been the typical suggestions that she was “simply following orders,” Glenn Carle, a former CIA interrogator, has described her as “one of the architects, designers, implementers and one of the top two managers of the [Enhanced Interrogation Techniques program] and a true believer, by all accounts, in the ‘Global War in Terror’ paradigm.”

Paul appeared on CNN this morning where he vowed to filibuster the confirmations of both Haspel and Secretary of State nominee Mike Pompeo.

Paul has made regular use of the filibuster or other lengthy floor speeches during his time in the Senate, tipping the government into a brief shutdown last month, and attempting to stall John Brennan’s nomination for CIA director in 2013. In the interview Sunday, Paul called on others to support him, including California Democratic Sen. Dianne Feinstein.

Paul said he takes issue with Pompeo’s hawkish statements and does not think the congressman turned spy chief would be a “good fit” for the nation’s top diplomatic post. “I don’t think our policy ought to be for regime change,” Paul said. On Haspel, Paul said, “What America stands for is not torture.” “Torture is the hallmark of totalitarianism,” Paul continued.