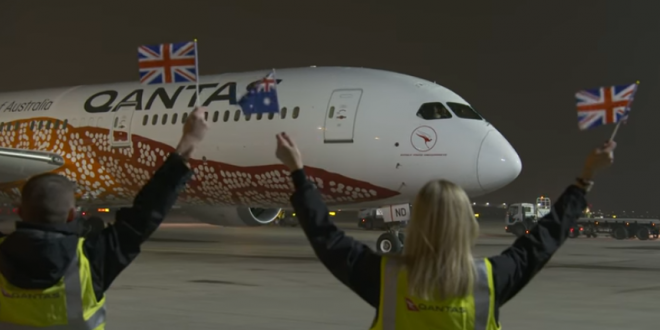 The first non-stop scheduled flight from Australia to the UK has landed in London – early – after a 17 hour, six minute journey across 9,240 miles (14,875km) from Perth. Qantas flight QF9, a Boeing 787-9 Dreamliner with more than 230 passengers and crew on board, touched down at 5.03am at Heathrow on a chilly Sunday morning to a welcome from ground staff.

The landing marked the first commercial passenger jet journey direct between Australia and Europe and has been described as a “game-changer” by some in the aviation industry. The Dreamliner, which Qantas says has 20% better fuel efficiency than similar-sized aircraft, covered the 14,875km with no major dramas. The idea of extreme long-haul travel has also prompted the company to consider new ways to tackle jet lag across multiple time zones.

As well as varying cabin pressure and the introduction of mood lighting , Qantas is teaming up with Sydney University to measure passenger sleep and movement onboard. Ten passengers on the first flight were fitted with medical-grade, Fit-Bit style, monitors to measure sleep and physical activity. Another device measured posture.