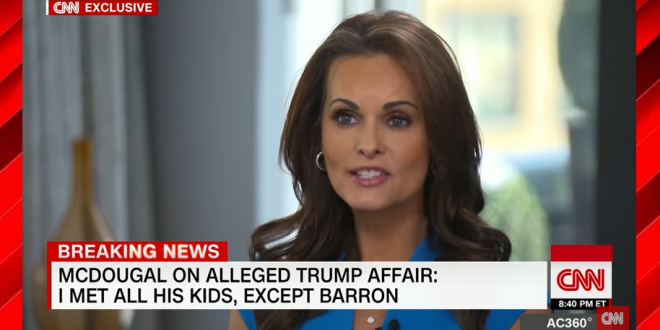 Playboy Bunny: Trump Said I Was Beautiful Like Ivanka

In an explosive interview with CNN’s Anderson Cooper, the former Playmate of the Year claimed that she and the future POTUS were romantically involved for 10 months, in 2006 and 2007. According to McDougal, Melania Trump had just given birth to son Barron when she met Trump at Hugh Hefner’s mansion and the alleged affair began.

Among the bombshells revealed in the interview — including a claim that Trump tried to pay her for sexual services — is McDougal’s charge that her alleged lover compared her to his own daughter, Ivanka Trump. Adult film star Stormy Daniels, who is also embroiled in a legal battle over a nondisclosure agreement related to her own rumored affair with Trump, made a similar claim that she was told she was “just like his daughter.”

“He’s very proud of Ivanka, as he should be — she’s a brilliant woman, she’s beautiful, that’s his daughter and he should be proud of her,” she said. “He said I was beautiful like her, and ‘you’re a smart girl.’ There wasn’t a lot of comparing, but there was some, yeah. I heard a lot about her.”