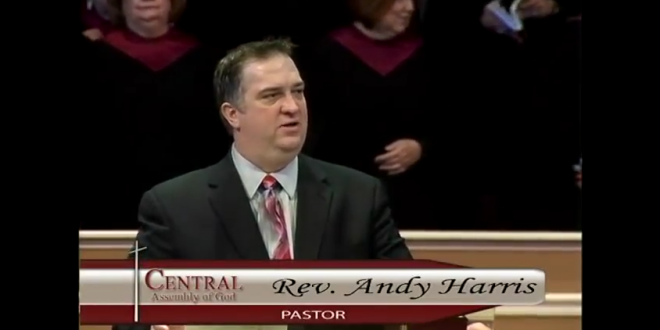 Pentecostal Pastor Busted For Meth Begs Congregation For Forgiveness: My Life Has Been A “Pressure Cooker” A Louisiana pastor has asked his congregation for forgiveness after he was arrested Wednesday night for possession of methamphetamine, a drug that he said he wrongfully turned to in attempting to find relief from the pressures and pains of life.

“A few months ago, in a time of weakness, I attempted to ease the pain in the wrong way,” wrote Andy Harris to members of The Church of the Cross in Haughton. “I have sinned, and I have asked the Lord to forgive me. I have asked my family to forgive me. And I am asking you all—all of you—to forgive me.”

A letter was read to the congregation on Sunday in which Harris outlined that the past few years of his life have felt like a “pressure cooker,” as he dealt with betrayals, a divorce in the family, the sicknesses of loved ones, and the daily challenges of serving in the ministry. He said that in the midst of all the pain he was enduring, he wrongfully turned to meth for solace.

It was under Harris’ administration that his church’s 199-foot-tall cross was erected on church property near Interstate 20. The cross – which in the United States is only shorter than one in Corpus Christi, Texas (210′) and St. Augustine, Florida (208′) – was not without controversy.

Harris made an impassioned plea to the Bossier Parish Police Jury in October 2008, after the project was turned down by the Metropolitan Planning Commission, threatening to file a suit in District Court. At the time, the area was zoned as a Residential Agriculture District and the maximum height allowed under that designation was 45 feet.

Harris, politically astute and aware of the implications told the BPJ, “The common man on the street is going to be looking at who’s for the cross and who’s not, and we all understand the ramifications.”