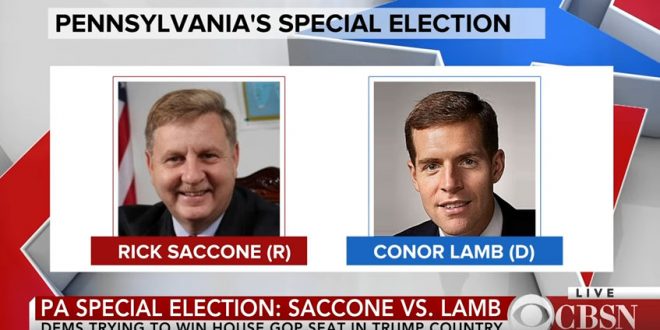 Just in from Monmouth:

Democrat Conor Lamb has taken a lead over Republican Rick Saccone in the special election for Pennsylvania’s 18th Congressional District. The Monmouth University Poll finds PA18 voters are divided on whether recently announced steel tariffs will help or hurt the local economy, but very few say this policy will influence their vote in Tuesday’s election to fill the open House seat.

Lamb holds a 51% to 45% lead over Saccone if turnout yields a Democratic surge similar to voting patterns seen in other special elections over the past year. Another 1% opt for a third party candidate and 3% are undecided. Lamb also has the edge using a historical midterm lower turnout model, albeit by a much smaller 49% to 47% margin.

A model with higher turnout overall, similar to a presidential electorate, gives Lamb a 51% to 44% advantage. This marks a turnaround from last month’s Monmouth poll of the race, when Saccone held a small lead in all the models – 49% to 46% in the surge model, 48% to 44% in the high turnout model, and 50% to 45% in the low turnout model.

Conor Lamb up by 6-points in new Monmouth poll.