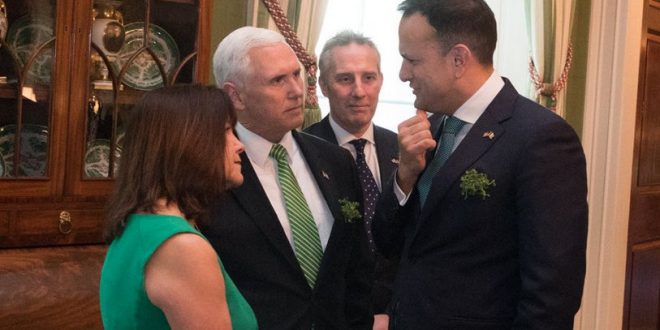 Vice President Mike Pence’s breakfast with new Irish Prime Minister Leo Varadkar was closed to the media — at the request of the vice president. In a departure from the recent past, reporters were told Friday’s event to be attended by Pence and Varadkar will be private and the media won’t be invited.

Pence also had a St. Patrick’s Day breakfast in March 2017 with Enda Kenny, the Irish prime minister at the time. The difference this year could possibly be Varadkar’s visibility as an openly gay man as well as Pence’s long record of opposing issues important to the gay and lesbian community.

People are speculating whether issues such as gay and lesbian rights and Pence’s stance on gay-conversion therapy might be discussed at their meeting. For instance, the Human Rights Campaign, an LGBTQ civil rights advocacy group, sent a tweet questioning the motive for banning the media from the Pence-Varadkar event.

Karen & I were honored to welcome Taoiseach Varadkar to our home at the Naval Observatory for an Irish breakfast. #StPatricksDay is the perfect time to celebrate our friendship & to marvel at Ireland’s lasting mark on America and the American people. pic.twitter.com/S9yroBwnf7

Ahead of his meeting with anti-#LGBTQ Mike Pence, Ireland’s openly gay Prime Minister Leo Varadkar said he wanted to bring up LGBTQ rights at the meeting.

Today, @mike_pence banned the media from covering the event.

We don’t think so. https://t.co/ouJirE7dSL