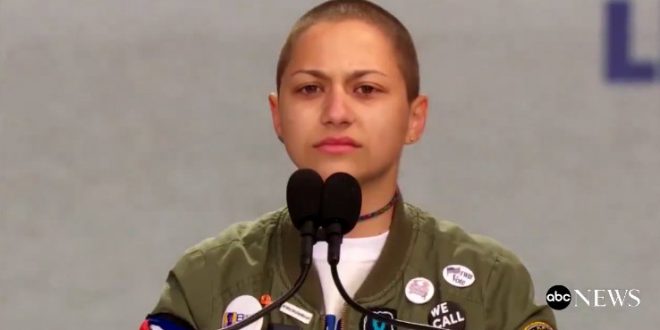 The speech delivered this afternoon by Emma Gonzalez will be the most remembered moment of this historic day. Count on it. Cosmo reports:

Parkland shooting survivor Emma Gonzalez has become a powerful activist, and when she took the stage to speak at today’s March for Our Lives in D.C., the crowd was moved by her stunning speech, which lasted 6 minutes and 23 seconds, the length of the Parkland shooting.

“Six minutes and about twenty seconds. In a little over six minutes, 17 of our friends were taken from us, 15 were injured, and everyone, absolutely everyone, was forever altered,” she began. She them stopped speaking and stared into the crowd, tears streaming down her face.

She ended the silence with, “Since the time that I came out here, it has been six minutes and twenty seconds. The shooter has ceased shooting and will soon abandon his rifle, blend in with the students as they escape and walk free for an hour before arrest. Fight for your life before it’s somebody else’s job.”

In a day of extraordinary moments, this is still remarkable: Emma Gonzalez stands for nearly six minutes in silence, angry, heartbroken, determined, after reading out the names of her murdered classmates. #MarchForOurLives pic.twitter.com/53yUEsm0sv