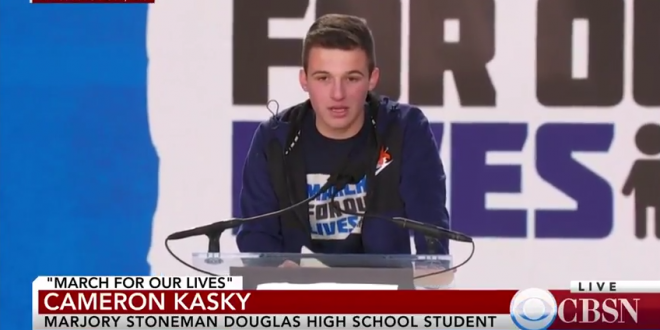 Parkland Activist Cameron Kasky Fires Up Rally: Stand For Us Or Beware, The Voters Are Coming! [VIDEO]

During today’s March For Our Lives rally in Washington, D.C., one of the Parkland students who has become an outspoken advocate for gun control spoke. And he used the speech to warn pro-gun politicians that the voters are coming for them.

Cameron Kasky began his address by telling the hundreds of thousands gathered “welcome to the revolution.” Stating that he’s been asked if he believes that “any change is going to come” following the tragic Marjory Stoneman Douglas shooting, he told the crowd to “look around” because “we are the change.”

“We must educate ourselves and start conversations that keep our country moving forward, and we will,” Kasky exclaimed to cheers. “We hereby promise to fix the broken system we’ve been forced into and create a better world for the generations to come. Don’t worry, we’ve got this.”

“Since this movement began, people have asked me, do you think any change is going to come from this?” says Cameron Kasky, a Stoneman Douglas student. “Look around. We are the change.” https://t.co/jujbxM0M4i #MarchForOurLives pic.twitter.com/qfKWO2sUZl

“We hereby promise to fix the broken system we’ve been forced into and create a better world for the generations to come,” Cameron Kasky says. “Don’t worry, we’ve got this.” https://t.co/jujbxM0M4i #MarchForOurLives pic.twitter.com/CTsw1hV2pr

“Either represent the people or get out … Stand for us or beware: The voters are coming,” Parkland student Cameron Kasky says to lawmakers pic.twitter.com/vKzBPa9KOP

“Today is a BAD DAY for tyranny and corruption.” @cameron_kasky needs to run for office. THIS IS A SPEECH.