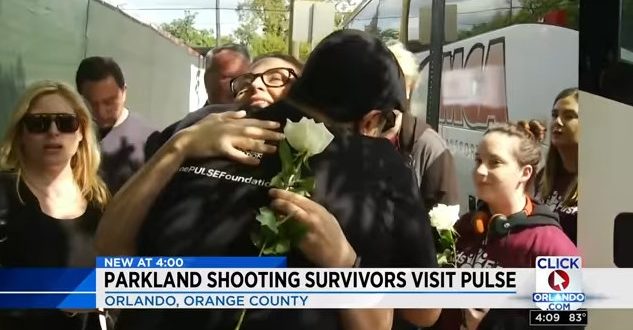 Survivors of the mass shootings at Orlando’s Pulse nightclub and a South Florida high school embraced Wednesday outside the club where 49 people were killed nearly two years ago. “We’re all family,” said Neema Bahrami, who was an event manager at Pulse at the time of the attack.

Pulse survivors, wearing shirts that read “We Will Not Let Hate Win,” stood among Parkland survivors, whose shirts read “Kids First, Politics Second.” The Parkland group hung 49 white roses on the gate surrounding the nightclub, one for each of the victims.

The visitors from Parkland made a stop at Pulse to pay tribute to the nightclub shooting victims and show solidarity with its survivors and activists as part of their trip home from Tallahassee, where they had petitioned lawmakers to reform the state’s gun laws.