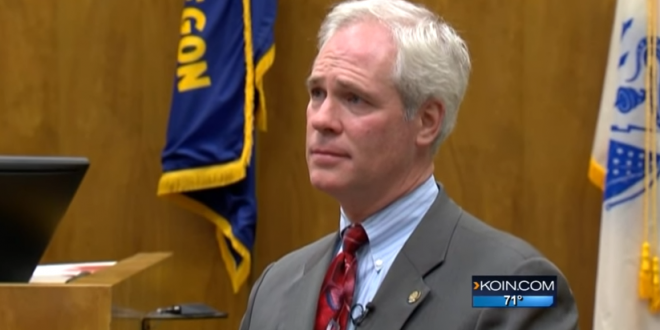 The Oregon Supreme Court Thursday took the unusual step of suspending a sitting state court judge — Vance Day of Salem — for three years. The high court found that Day — a Marion County Circuit Court judge — had committed “willful misconduct” and made “willful misstatements” to investigators to cover-up the truth.

Among Day’s misdeeds, the Supreme Court found that Day acted with prejudice against same-sex couples by deciding he wouldn’t marry them — and he instructed his staff to employ a scheme to avoid “public detection” of his plan.

Among “exceptionally serious” misconduct, the Supreme Court found that Day falsely claimed that he didn’t know a man that he supervised on probation was a felon. Day allowed that man to handle a gun twice in his presence — even though Day had told the man in court that he was forbidden from handling firearms, the court found.

She called him a man of integrity and said removing him from the bench would be excessive for his conduct and that a censor would suffice if a punishment is required. While Day awaited a Supreme Court decision the past nine months, he also has been preparing for his trial on felony gun charges. That is scheduled to begin April 17.

Day was indicted on two felony gun violations and two counts of first-degree official misconduct in November 2016 for allegedly providing the gun to Brian Shehan, a Navy SEAL who participated in the Veteran’s Treatment Court that Day presided over.

VIDEO: As you’d expect, the judge has already been turned into a martyr by right wing Christian groups.

Previous Manafort Seeks Dismissal Of Charges Because Mueller Is Only Supposed To Look For Trump-Related Crimes
Next BREAKING: Mueller Subpoenas Trump Organization