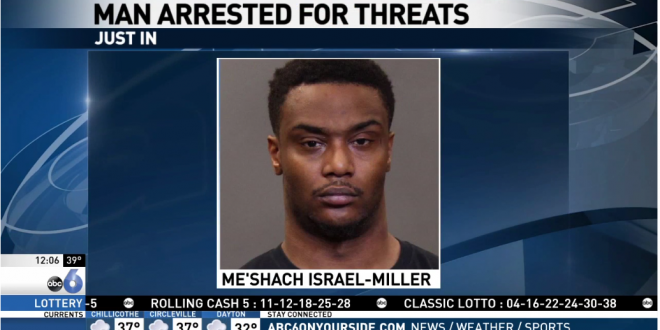 A man has been arrested for making death threats towards the LGBTQ community on a popular dating app. The Columbus Division of Police said in a post on their Facebook page, that officers arrested 27-year-old Me’Shach Israel-Miller Tuesday night at his home and charged him with inducing panic and aggravated menacing.

Police say on March 1, officers were made aware that someone had been making threats towards the LGBTQ community on a popular dating app called Grindr. Israel-Miller told a user he was going to kill him and “85 faggots at a gay club”. The victim posted screenshots of the threat on Facebook, which caused the post to go viral.

From the Columbus Police Department:

Sgt. Nick Konves, CPD’s LGBT Diversity/Inclusion Liaison, says he will be reaching out to the prosecutor’s office to look at the filing of the Columbus hate crime statue. “The LGBT community asked that I express their appreciation for the extra resources from Zones 4 & 5 that were placed in the Short North this weekend due to the threat,” said Sgt. Konves.

Previous Sean Hannity: The Despicably Low, Hate-Trump Media Exploited Nunberg To Do Their Dirty Work [VIDEO]
Next Ted Cruz Warns That The Rage-Filled “Extreme Left” Will Turn Out In Historic Numbers For The 2018 Midterms