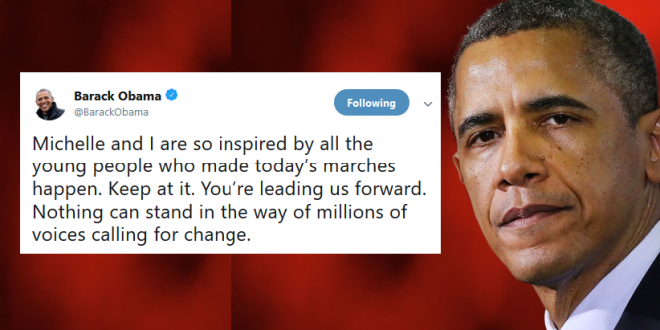 Former President Barack Obama on Saturday tweeted a message of support for the students participating in the March for Our Lives worldwide. Obama tweeted that he and former first lady Michelle Obama are “inspired” by those who organized the marches.

Hundreds of thousands of young people gathered for the marches on Saturday, which took place in all 50 states and on six continents.

The student survivors of the February shooting at a Florida high school organized the movement to call on lawmakers to act on gun control and school safety. President Trump spent the weekend at Mar-a-Lago, his private beach club in Florida. The White House released a statement Saturday applauding the activists for “exercising their First Amendment rights.”

Michelle and I are so inspired by all the young people who made today’s marches happen. Keep at it. You’re leading us forward. Nothing can stand in the way of millions of voices calling for change.

Previous Parkland Activist Cameron Kasky Fires Up Rally: Stand For Us Or Beware, The Voters Are Coming! [VIDEO]
Next Parkland’s Emma Gonzalez Stuns Nation With Six Minutes Of “Silence Heard ‘Round The World” [VIDEO]