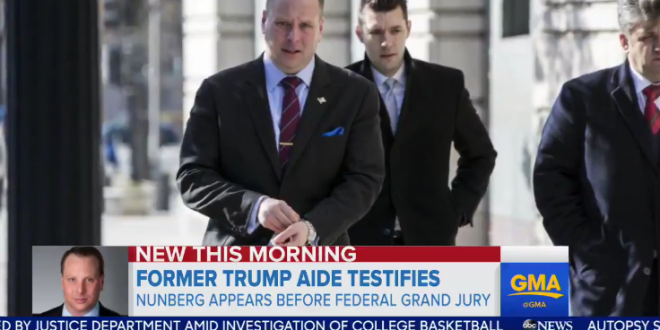 Sam Nunberg After Testifying: This Isn’t A Witch Hunt

So much for his vow to lay low, huh?

After testifying before a grand jury in the Russia probe, a former political adviser to Donald Trump told ABC News exclusively that he believes the investigation is “warranted.” “No, I don’t think it’s a witch hunt,” Sam Nunberg told ABC News. “It’s warranted because there’s a lot there and that’s the sad truth.”

He added, “I don’t believe it leads to the president.” Instead, Nunberg said he believes that many in his inner circle may face legal trouble, including his own mentor and former Trump campaign aide, Roger Stone. “I’m very worried about him,” Nunberg said. “He’s certainly at least the subject of this investigation, in the very least he’s a subject.”

Previous Trump Dines With “Great” State TV Host Jesse Watters
Next Putin On Russian Meddling In US Election: “So What?”