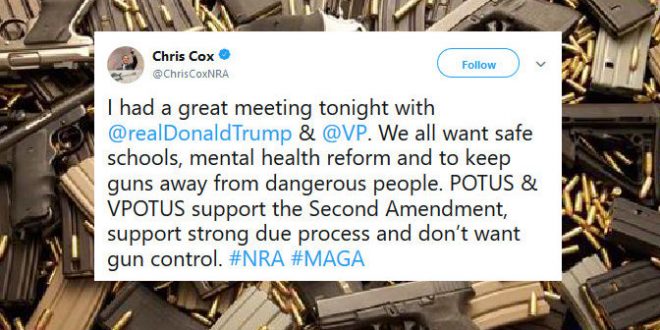 President Trump and an NRA executive had a “good (great)” meeting at the White House on Thursday — one day after Trump told lawmakers to take people’s guns away and “go through due process second.”

Trump met with the head of the National Rifle Association’s lobbying arm, who stated after the Oval Office sit-down that the president is a steadfast supporter of its pro-gun agenda.

Chris Cox, the executive director of the NRA Institute for Legislative Action, said that the president supports the Second Amendment and safe schools — but not gun control.

I had a great meeting tonight with @realDonaldTrump & @VP. We all want safe schools, mental health reform and to keep guns away from dangerous people. POTUS & VPOTUS support the Second Amendment, support strong due process and don’t want gun control. #NRA #MAGA