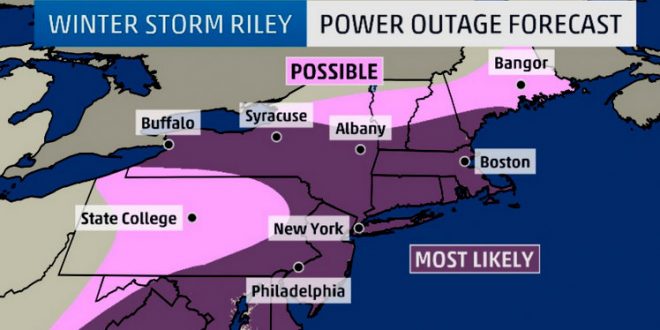 More than 1.6 million homes and businesses are without power amid a winter storm stalled over the eastern U.S.

From North Carolina to Maine and westward to Michigan, the storm has felled trees, downed power lines and blown down buildings under construction.

The most outages are in Pennsylvania, where 376,000 homes and businesses had no power Friday afternoon. The Tappan Zee Bridge in New York and bridges in Rhode Island were closed to heavy trucks because of high winds.

Also from the AP:

Airlines canceled more than 2,800 flights, mostly in the Northeast. LaGuardia Airport in New York City grounded all flights, and John F. Kennedy, also in the city, grounded all but a few departures.

The Eastern Seaboard was hammered by wind gusts exceeding 50 mph, with possible winds of 80 to 90 mph on Cape Cod. Hurricane-force winds of 78 mph were reported off of Wellfleet, Massachusetts.

Amtrak suspended service along the Northeast Corridor, from Washington to Boston. In New Jersey, a downed tree that hit overhead wires and suspended some New Jersey Transit commuter service.