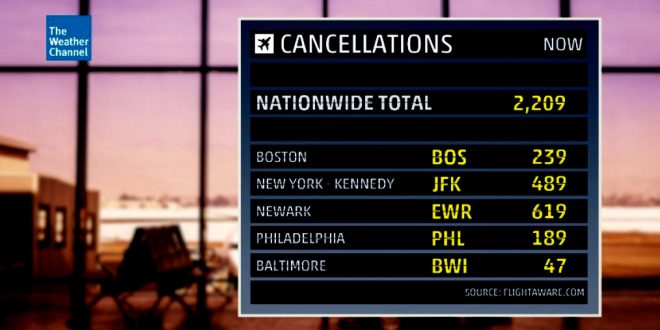 The second big, blustery storm to hit the Northeast in less than a week began bringing wet, heavy snow Wednesday to a corner of the country where tens of thousands of people were still waiting for the power to come back on from the first bout of wintry weather. The nor’easter closed schools and government offices, grounded flights and raised fears of another round of fallen trees and electrical outages as it made its way up the East Coast.

The National Weather Service issued a winter storm warning through Thursday morning from the Philadelphia area through most of New England. Forecasters said areas west of the Interstate 95 corridor could easily get more than a foot of snow, with some places in northwestern New Jersey expected to receive up to 2 feet. Flights across the region were canceled even before the first flakes fell, and the number was expected to climb as conditions deteriorated.

Governors declared states of emergency and airlines canceled thousands of flights as a dangerous nor’easter threatening 50 million people began its slow march through the Northeast on Wednesday. The blizzard that slammed the Midwest on Monday was expected to batter New England and East Coast states to the south with rain, snow and wind. More than 50 million people live in areas under a storm watch or warning, with some areas bracing for up to 18 inches of snow before the storm winds down late Thursday.

More than 2,100 flights had been canceled for Wednesday and even a few for Thursday as airlines struggled with schedules. More than 540 flights — 275 departures and 268 arrivals — had been canceled at Newark Liberty alone early Wednesday. FlightAware calculated that represented more than 40% of all flights there for the day.

Similar problems were reported at JFK and LaGuardia, where more than a third of Wednesday’s flights had already been canceled. About 20% of the entire day’s schedule had been grounded at other airports, including Boston, Philadelphia, Buffalo, Burlington, Vt., and Manchester, N.H. It was closer to a third of the day’s schedule at the airports serving Albany, N.Y.; Hartford, Conn.; and Portland, Maine.

Not only is the big ocean cyclone which evolved from last week’s #noreaster still out there, but clouds from today’s coastal cyclogenesis are overlapping its western edge pic.twitter.com/x57g7A9ywV

It’s a snowy sunrise this morning as #GOESEast captures the water vapor covering the Northeastern United States. This geocolor imagery combines multiple spectral bands on the satellite to capture the view as the human eye would see it from space. More: https://t.co/mbgRYot60A pic.twitter.com/HrgjE9AS5o

Approximately 587 flights scheduled for today have been canceled due to the nor’easter. Please confirm flight status before arriving at #LGA and allow extra travel time.

Flying into the Northeast today? Probably not. Lots of canceled flights thanks to #Quinn pic.twitter.com/OnGzyrB0nY