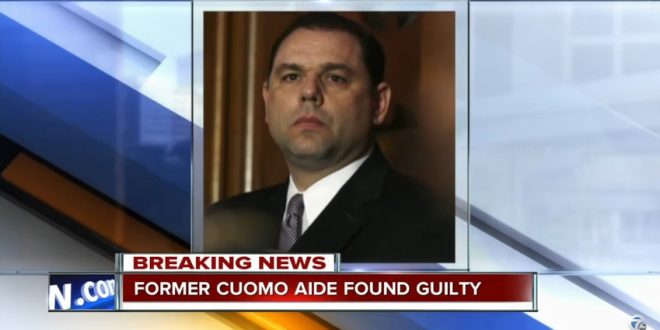 A former top aide to Gov. Andrew Cuomo was convicted on corruption charges Tuesday at a trial that further exposed the state capital’s culture of backroom deal-making.

A federal jury in Manhattan found Joseph Percoco guilty of two counts of conspiracy to commit honest services wire fraud and one count of soliciting bribes after deliberating for parts of three weeks. He faces a maximum of 20 years in prison.

Jurors had informed the court twice that they were deadlocked in the case against Percoco and three businessmen accused of paying his family more than $300,000 in bribes, but U.S. District Judge Valerie Caproni asked them to keep deliberating and on Tuesday said she would accept a partial verdict.

One of his co-defendants, Steven Aiello, an executive at COR Development Co., was found guilty of conspiracy to commit honest-services wire fraud, and not guilty on two other charges. Another COR executive, Joseph Gerardi, was found not guilty on two counts. And the judge declared a mistrial for a fourth defendant, Peter Galbraith Kelly Jr., a former energy-company executive. Mr. Percoco is scheduled to be sentenced on June 11. He faces up to 50 years in prison.

One of the last major cases charged by former Manhattan U.S. Attorney Preet Bharara, the trial was the latest in a long string of federal corruption cases out of Albany under Mr. Bharara’s watch. But it was the first to concern activity directly within the uppermost ranks of Mr. Cuomo’s administration.

The lengthy trial also featured an unusual twist: the arrest of a cooperating witness midway through his testimony. Todd Howe, a former lobbyist and Cuomo loyalist who was the self-described middleman between Mr. Percoco and the businessmen, was considered key to the government’s case.

Defense lawyers had said the payments Percoco and his wife received were legitimate fees for consulting work performed at a time when he was out of state government. Prosecutors countered by citing emails in which Percoco and cooperating witness Todd Howe referred to money using the word “ziti,” a term borrowed from the HBO mob drama “The Sopranos.”

While Cuomo himself was not accused of wrongdoing, testimony also painted an unflattering picture of the inner workings of his office.

There was testimony about administration officials using private email addresses to conduct state business in secret, and about how Percoco continued to work out of a state office even after he was supposed to have left government to lead Cuomo’s 2014 re-election campaign.

If Cuomo does run for president in 2020, as some think he will, expect this case to play prominently during the campaign.