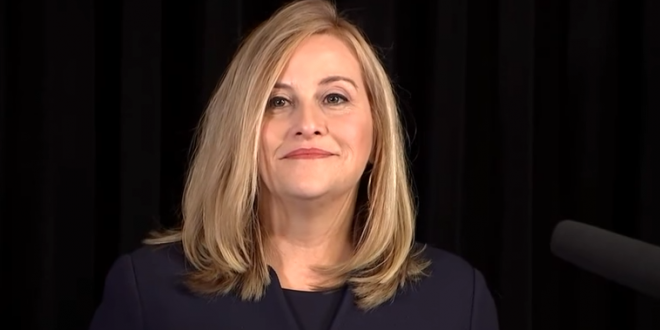 Megan Barry resigned as Nashville’s mayor Tuesday morning, weeks after admitting an affair with the police officer who ran her security detail. Barry announced her resignation at a news conference, shortly after she pleaded guilty to a felony theft charge related to the affair.

She kept her remarks brief and smiled throughout the announcement. “It has been my honor and it has been the privilege of my entire professional life to have had the blessing and the opportunity to be your mayor,” Barry said. “God bless this wonderful city. I love you, Nashville.”

Barry pleaded guilty Tuesday to felony theft of property over $10,000 related to her affair with former police bodyguard Sgt. Rob Forrest. She agreed to reimburse the city $11,000 in restitution, and serve three years probation. “Thank you judge,” Barry, appearing in a black dress, said after entering the plea. “I appreciate you.”

Taking the unusual step of appearing himself in court, instead of assigning a deputy, District Attorney Glenn Funk said that “had this case gone to trial, witnesses are available who would testify that in March 2016 and January 2018 Megan Barry caused over 10K but less than 60K in Metro Nashville city funds to be expended unlawfully on Mr. Robert Forrest.”