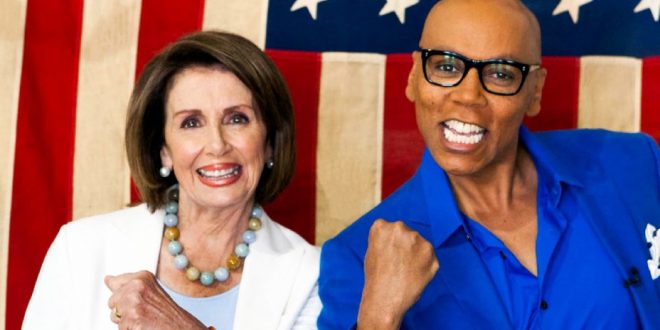 The ever-blurring lines between politics and pop culture grow fuzzier — and more fabulous! — when Democrat Leader Nancy Pelosi pays a surprise visit this week to RuPaul’s Drag Race All Stars. Pelosi represents California’s 12th district in Congress, which includes all of San Francisco — so it’s safe to say she’s found her way around a drag queen or two in her career. But the cameo isn’t just fun and games. Pelosi stopped by Drag Race as a show of solidarity with the LGBTQ community, as her political foes in the Republican party and Trump administration roll back a startling number of advances made by the Obama Administration on LGBTQ rights.

The full interview is quite good, but here’s where the reporter asked Pelosi what song Trump should “lip-sync for his life” to:

“You know what? Donald Trump’s policies, the respect I think his administration should have for the LGBTQ community, that’s more important than the fun we might have about his hair or any song he might lip sync. Though I do think he’s lip syncing some of his policies, because when you talk to him, he says, ‘I really am with you on this.’ And then his policy goes and does something else.”

Pelosi closes by saying she wants Trump to “sashay away.”