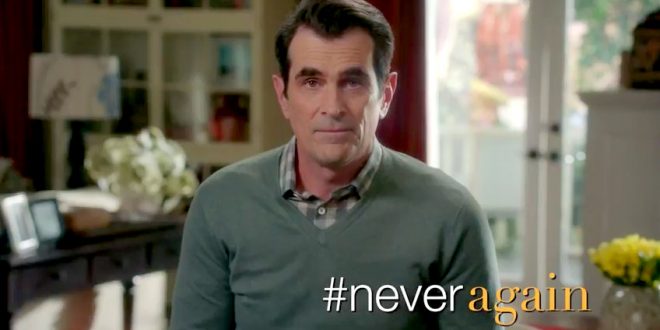 The cast of Modern Family is saying #NeverAgain to gun violence in America. In an exclusive PSA for Everytown for Gun Safety, Julie Bowen, Ty Burrell, Jesse Tyler Ferguson, Nolan Gould, Sarah Hyland, Ed O’Neill, Sofia Vergara and Ariel Winter come together to stand with the survivors of the Feb. 14 shooting at Stoneman Douglas High School in Parkland, Fla.

“We sent our condolences and support to the students of Parkland,” Ferguson, 42, says in the video. Adds Bowen, 48, “Your bravery and resolve in response to the senseless tragedy inspires us and gives us hope.”

Hyland, 27, chimes in saying that the stars of the ABC comedy back everyone fighting for “common sense gun laws,” and her onscreen sister Winter, 20, encourages all Americans to register to vote.