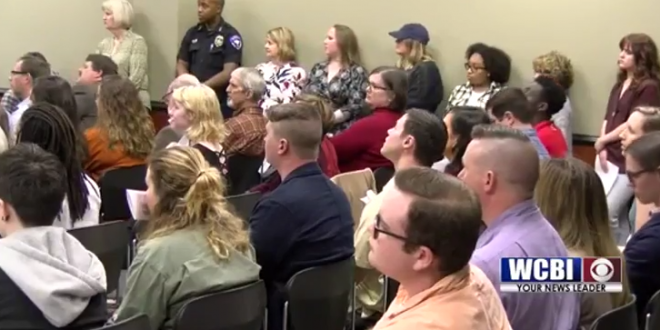 Starkville aldermen vote to allow Starkville Pride to hold a pride parade. The vote passed 3-3 with 1 abstention. Mayor Spruill was forced to break the tie. Ward 3 Alderman, David Little, chose to abstain, while Perkins, Vaughn and Carver voted against. Aldermen Sandra Sistrunk, Jason Walker and Patrick Miller voted in favor of the parade.

The controversial vote to deny a request to hold a Starkville Pride Parade was reconsidered tonight, two weeks after voting down the request for a pride parade. Since that vote, a federal lawsuit was filed seeking to get the board to overturn its ruling, or have a judge issue an injunction allowing the parade to take place on March 24th.

Here are some photos of the reaction after the Starkville Board of Aldermen approved @starkvillepride ‘s #LGBT Pride Parade with a 4-3 vote. pic.twitter.com/utofzdUHEt

Thank you Meagan for speaking on behalf of the LGBTQ+ community. We appreciate you. pic.twitter.com/rozzyrOu64

Citizens are also taking to the podium to speak on why they think the board should not approve a request for a Pride Parade in Starkville pic.twitter.com/6A5yp2xTKZ