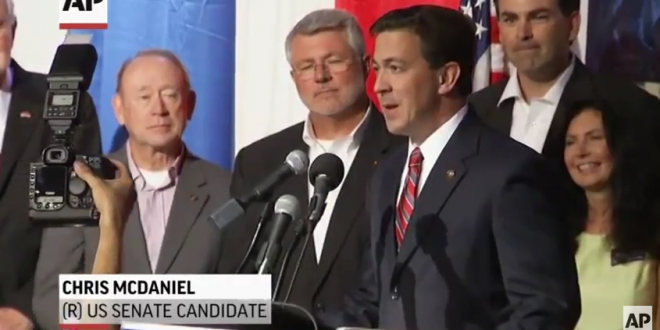 The early departure clears the way for Gov. Phil Bryant, a fellow Republican, to appoint an interim successor — perhaps Lt. Gov. Tate Reeves — and sets up a special election on Nov. 6. It also raises the possibility that State Sen. Chris McDaniel, who announced a primary challenge to Republican Sen. Roger Wicker last week, will switch races to take on Bryant’s pick.

“It’s a bit premature,” McDaniel told NBC News Monday when asked whether he might change targets. “In politics you keep all your options on the table … never foreclose possibilities.”

Surely you remember the grotesque attack on Cochran committed by McDaniel supporters back in 2014:

News broke in the Clarion Ledger on May 17, 2014, that a 28-year-old aspiring political blogger had been arrested for sneaking into the nursing home where Cochran’s now-late wife, Rose, had lived since 2000. She was suffering from progressive dementia and bedridden.

McDaniel supporter Clayton “Constitutional” Kelly of Pearl, egged by others, sneaked into the nursing home on Easter Sunday and photographed Rose, then used the image in an online political hit piece against Cochran, insinuating he was having an affair with a staffer and that the two were traveling the world while his wife languished. (Cochran married the staffer in question, Kay Webber, on May 23, 2015, five months after Rose died on Dec. 12, 2014.)

Kelly was ordered by co-conspirators to quickly pull the video down, but Cochran’s campaign had already captured it. After an ensuing investigation, charges were brought against Kelly and three other McDaniel supporters — Richard Sager, a Laurel teacher and coach; John Mary of Hattiesburg, a tea party activist and former radio show host; and respected attorney and state Republican tea party leader Mark Mayfield.

Mayfield, whose own mother was in the same dementia unit with Rose Cochran, killed himself shortly after his arrest. The nursing home incident cost McDaniel the election.

According to reports at the time, Cochran’s adult children had accepted their father’s affair because he was unwilling to divorce his incapacitated wife. Cochran’s own cognitive issues are believed to have spurred yesterday’s retirement announcement.