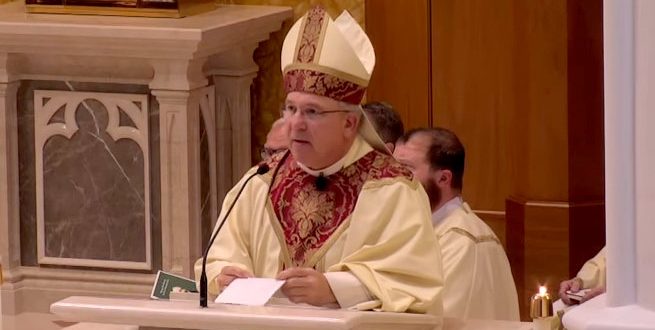 Police obtained the three search warrants that were being executed as part of the investigation that started Feb. 25 with the arrest of the Rev. Robert DeLand. Saginaw County Assistant Prosecutor Mark Gaertner said Cistone and the diocese have not lived up to promises to support investigators looking into sexual abuse allegations against DeLand and other church officials.

“Contrary to the statements from the diocese and the bishop that they would fully cooperate with law enforcement, they did not,” Gaertner said. “Therefore, it was necessary for law enforcement to utilize other investigative tools, including search warrants.”

Messages were left with the diocese seeking comment. Doors to the diocese office in Saginaw Township were closed. Saginaw Township police officers were barring anyone from entering the building at 5800 Weiss St.  An MLive reporter went to the home of Cistone, knocked on the door and rang the doorbell, but no one answered. A window in the door was broken out and glass was on the floor.

Six years ago, Cistone was accused of misleading a grand jury by not acknowledging that he witnessed the shredding of documents that contained the names of priests suspected of child molestation in 1994 while he was serving as a church official in the Philadelphia area. He never faced any criminal charges in that case.