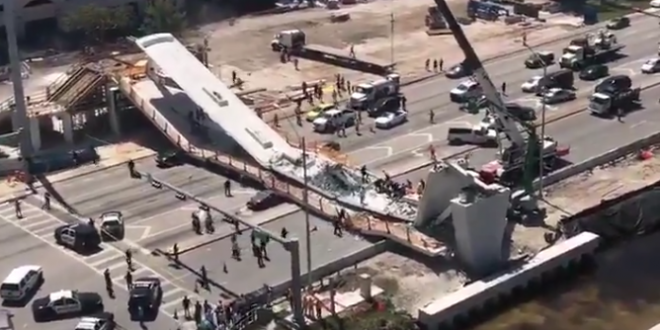 MIAMI: Missed Voicemail From Engineer Had Warned About Cracks In University Pedestrian Bridge

An engineer left a voicemail two days before a catastrophic bridge failure in Miami to say some cracking had been found at one end of the concrete span, but the voicemail wasn’t picked up until after the collapse, Florida Department of Transportation officials said Friday.

The voicemail left on a landline wasn’t heard by a state DOT employee until Friday because the employee was out of the office on an assignment, the agency said in an email. In a transcript released Friday night, Denney Pate with FIGG Bridge Group says the cracking would need repairs “but from a safety perspective we don’t see that there’s any issue there so we’re not concerned about it from that perspective.”

The bridge collapsed Thursday, killing at least six people. Authorities are slowly removing the debris, looking for more victims. At a news conference Friday night, officials from the National Transportation Safety Board said they have just begun their investigation, and cannot yet say whether any cracking contributed to the collapse.

Previous Parkland’s David Hogg Promotes Anti-Gun March: What If Politicians Weren’t The Bitch Of The NRA? [VIDEO]
Next Trump Lawyer: Mueller Probe Must Now Be Shut Down