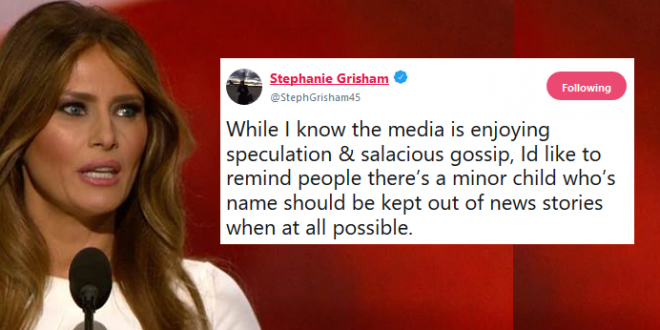 On Sunday, a former adult film actress who alleges she had an affair with President Donald Trump sat down with Anderson Cooper on 60 Minutes to tell her story. After the interview with Stormy Daniels aired, Melania Trump’s spokesperson tweeted about Barron.

The first lady’s representative reminded the media that the Trumps’ son is a child and that it is imperative to protect his privacy when reporting on recent news.

As the Trump family has received much attention in the news media since Trump’s inauguration, some have repeatedly taken a stand to ensure that the privacy of Trump’s 12-year-old child is protected. Indeed, one of the individuals who has spoken out most about the topic is former first daughter Chelsea Clinton.

While I know the media is enjoying speculation & salacious gossip, Id like to remind people there’s a minor child who’s name should be kept out of news stories when at all possible.

There are **two** minor children, Daniel’s and Trump’s. Only one child’s mother was physically threatened.