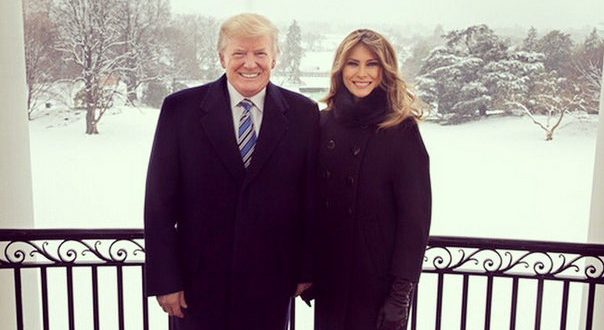 President Trump — facing a slew of accusations of sexual shenanigans from several women — on Thursday tweeted a photo of himself and the first lady looking lovey-dovey at the White House. Melania Trump first posted the photo, showing her and her allegedly wayward hubby in overcoats standing side by side on a White House balcony and smiling widely with a snow-covered lawn in the background. Trump then retweeted the image, a day after accusations about his past sexual exploits surfaced on three fronts.

Melania Trump has kept a low profile as FLOTUS. But her dependably unprovocative social media posts often mean that there’s a rarity of photos featuring only her and President Trump. In fact, prior to her Thursday post on Instagram and Twitter of them on a snowy day at the White House, the last time Melania posted a solo photo with Trump was on Christmas Eve — 88 days ago.

Below is that photo from 88 days ago. Rather different. Now caption this one.